Lord Stephen Green, the Head of HSBC during the dark years of tax avoidance and evasion, is currently reluctant to talk to the press about his then tenure at the bank. In those days, he was not at all reluctant to share his views on the moral and ethical questions facing the banking industry. He was not only a Banker but also the Author of ‘Good Value’ and ‘Serving God? Serving Mammon?’ I assume Mr Mammon was a Tax Evader. 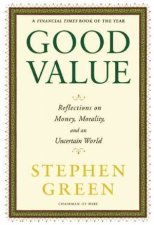 ‘Good Value’ book review: With bank bailouts and executive bonuses in the headlines, it’s hard to find the connection between banking and ethics.

But it’s an argument that Stephen Green, chairman of HSBC — one of the biggest banks in the world — makes in his new book about banking: Good Value: Reflections on Money, Morality and an Uncertain World.

Green is also an ordained priest in the Church of England. In his book, he proposes a “new capitalism” that brings good business and good ethics together. He says moral and spiritual values should take precedence over immediate profit

Further titles in the series will include:

Pope Francis: Atheists May Have a Point

David Cameron: Tips and Tricks when Shopping at Lidl